How many Google Wallet users are there?

#1
When Google Wallet was introduced in May 2011, it looked as though Google was going to push cashless in-store (as opposed to just online) payments in a big way.

“You’ll be able to tap, pay and save using your phone and near field communication (NFC). We’re field testing Google Wallet now and plan to release it soon,” said the blogpost introducing it. “With Google Wallet, we’re building an open commerce ecosystem, and we’re planning to develop APIs that will enable integration with numerous partners.”

The first partner was Citi Mastercard - but since then, Google Wallet has barely made any progress. It is still limited to the US, with no signs of being extended beyond those shores.

But the introduction of Apple Pay with the iPhone 6 and 6 Plus has renewed interest in NFC-based payment systems.

And with more than 10m NFC-enabled iPhones having been sold and distributed worldwide, of which perhaps half have gone to the US, the question is: how effectively will Apple Pay compete with Google Wallet?

Figuring the numbers
Google declined to give the number of downloads of Google Wallet, which is available as a download from Google Play. (It is region-controlled, and so cannot be installed on devices outside the US.)

The current number of downloads shows as between 10m and 50m - offering a wide margin for error.

However, based on download figures on the Google Play store, the total installed base is less than 20m. Download milestones recorded on the Internet Archive show that it passed 1m in August 2012, 5m download byMarch 2013 and passed 10m downloads between 4 October and 9 October 2013.

Based on that data, the growth in downloads fits a straight-line extrapolation, which yields this graph: 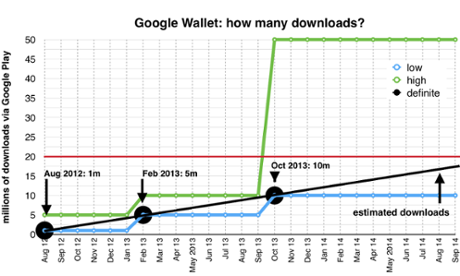 Google Wallet downloads can be estimated by a straight-line graph fitted to its download milestones recorded in the Internet Archive. By September 2014, they would be below 20m. Photograph: Guardian
That suggests that there have been fewer than 20m downloads of Google Wallet. Although it comes preinstalled on the Nexus line of phones, those have had comparatively low sales - in the single-digit millions in the US - suggesting 20m as the maximum number in use.

Google declined to comment on the Guardian estimate. However, sources with authoriative sources at the company indicated that it is “not far away from the truth” and that 20m is viewed there as “actually a good number”.

Downloaded - but who’s using?
But of 20m downloads, how many might be active? Once again, Google hasn’t released any information.

If we assume that those who gave the app one or two stars are not active users (which seems reflected in their comments) while those with three or more stars do use it, that suggests there are about 16.4 million devices using Google Wallet in the US. If one assumes that only the proportion who give it one star don’t use it, the figure is 17.1m.

Compared to the total 89.4m Android userbase in the US (via data from ComScore), that means around 19% - or nearly one in five - has the Google Wallet app and probably uses it at least occasionally.

Wallet has also been criticised for being difficult to use. “I had to first unlock my phone by typing a PIN, then open my wallet app and unlock that with a separate PIN,” noted Daniel Wolfe in an article in May. Nielsen in July 2014 found that out of all those who had made an NFC-enabled purchase in the US, only 37% had done so with a phone.

The total value in the US of mobile payments (which includes both Google Wallet and the carriers’ own Softcard, recently rebranded from Isis) in 2013 was expected to be $37bn, up 50% from $24.7bn in 2012.

But how much was down to Wallet? Google hasn’t released any data on the value or volume of transactions made through it, either in real-world shops or for mobile sites and apps online. In September 2012 it claimed that “usage has more than doubled” with the addition of multiple credit cards to those accepted by Wallet.

The biggest problem Google has faced is Softcard, which uses mobile carrier-issued sims - which block Google Wallet payments in shops. All the big US carriers, except Sprint, are Softcard members - making it likely that Google Wallet’s use for real-world payments, as opposed to online ones, has been stymied.

Apple however may break the logjam, as its NFC model routes around Softcard - which now looks under threat.

Different models
Google’s model for Wallet differs substantially from that of Apple Pay. In Apple’s model, the user stores a secured “token” issued by their bank on their phone; this token is then used for transactions, authorised by the user’s fingerprint on the phone’s Touch ID system. Apple receives a small cut of the transaction - reported to be 0.15%. But Apple is not involved in the transaction: it is not involved in any of the processing, though the banks which authorise the transactions can “see” its involvement because of the token used.

Google Wallet, by contrast, does not use the same bank-issued token mechanism. Instead, users’ cards are “enrolled” into Google’s system, which then becomes a front end for any transactions - so that when a user buys something, Google makes the actual payment and in effect charges it back to the user’s card. Google thus “sees” every transaction by every user.

While this is advantageous for Google’s data collection model, it has costs. Bloomberg BusinessWeek reported last year that “Google Wallet is leaking money”. In its report, it said that “Google pays such high fees to the credit-card companies it works with, though, that it loses money on every transaction, says Osama Bedier, who stepped down as head of Wallet on May 20 and will shortly leave the company.”

The rollout of Apple Pay - and more importantly the installation of NFC-enabled terminals in stores across the US - should mean greater uptake for Google Wallet.

But although Google Wallet has a far larger installed base, Apple’s iPhone sales suggest that it could quickly challenge Google Wallet in the US for real-world transactions, and the company is also implementing payments for apps.

That means the stage is set for NFC to take off - and also for a fresh battle to be fought, in which Apple is claiming privacy (it doesn’t track transactions) and usability (where transactions are authorised via its TouchID system) while Google can claim broader reach through its installed base.